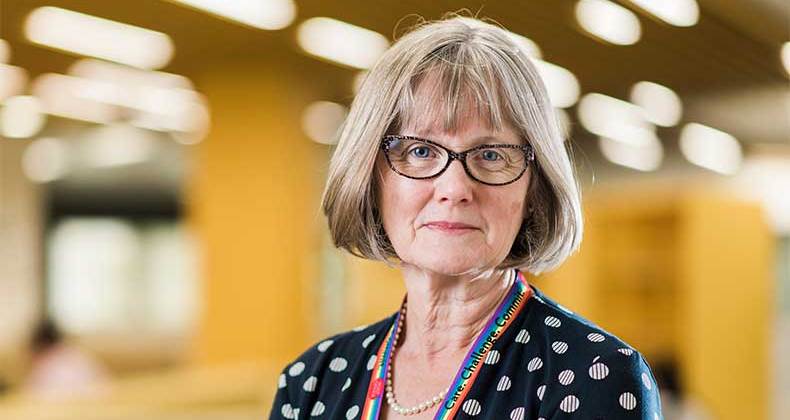 I have lived and breathed the business my whole life

Company Secretary Alwen Lyons leaves the business at the end of August. She has held a long and diverse career with Post Office, and in this blog reflects on her 33 years with the business.

After leaving the business, Alwen has plans in place to volunteer for two charities in West Sussex – Riding for the Disabled Association, which works with disabled children and adults through contact with horses, and a women’s refuge, which helps victims of domestic violence rebuild their lives.

Where it began
I suppose Post Office is in my blood and has been a part of my life for as long as I can remember. When I was a baby my parents ran a post office in East London and when I was 9 we all moved down to Shoreham-by-Sea where my father took on a role with the National Federation of SubPostmasters (NFSP) where he went on to become the General Secretary, and when my youngest daughter was just 10 days old, she came with me to the NFSP Annual Conference to see him retire. So I have lived and breathed the business my whole life.

The opportunities I have been given
I joined the Royal Mail Group graduate scheme in 1984. When I was offered a place, I didn’t think twice - I already had that connection; it felt right. During my time with Royal Mail and Post Office I have been offered some  fantastic roles, so although I have been here for 33 years, there has  always been a new challenge around the corner.

I’ve held several roles; including Finance Director for the South East Region, Eastern Territory General Manager, Head of Industrial Relations (working with the unions), Head of Engagement and Internal Communications, Head Of Mails and Retail and finally leading the work to separate Post Office from Royal Mail Group. Early on in my career Post Office also sponsored me to become a Qualified Accountant.

I’ve stayed because I have been given the opportunity to do some really big challenging jobs over the years, people have taken a risk and trusted me to deliver.

The highlights
There have been several highlights during my time.

Why diversity and inclusion is important to me
We need to support people to be themselves and help them to develop so they can do the best they can. I’ve been given the opportunity to do so many different roles over the years, despite being a woman!

I have led some brilliant teams and always found that people from diverse backgrounds bring new and diverse ideas. Back in 2004 I saw a lack of gender equality within the business, and felt I needed to do something to put it right. Setting up SWAN was challenging, but worth the effort, and it led to the Women in Leadership initiative and then the wider inclusivity work

Our postmasters, and customers in the communities we serve are diverse so we should reflect that. That goes for gender equality, ethnic diversity, sexual orientation and making work accessible for people with disabilities.

There’s still more to be done and I feel so honoured that this work will live on through the recently announced Alwen Lyons Award, which will recognise people who drive diversity at Post Office.

Supporting Post Office from the other side
We’ve made enormous progress in the last few years, seeing the business go from loss to break even has been a big achievement from everyone. I’ve been proud to be part of the Paula’s management team and I will continue to watch the business with interest.

I’ll also be interested to see how far the diversity and inclusion agenda will take us as a business – the opportunities are vast.

I think we now need to crack digital because the world is changing. There’s a big challenge in terms of building our digital capability and presence whilst maintaining the trust our customers have in our postmasters through face-to-face interaction. If we’re going to become digital, our main asset remains our branch network.

Some final advice…
People say it can be frustrating to work for Post Office – everything takes so long to happen. But I would say, work with people rather than against them. Don’t be afraid to ask stupid questions.

There is so much knowledge and experience in the business – get to know people in the organisation – there will always be someone who knows the answer and will help get things done. Work together it is so much more rewarding.

A shorter version of the interview features in the next issue of the magazine, out in September.

Share I have lived and breathed the business my whole life with your friends!

Share I have lived and breathed the business my whole life by Email!