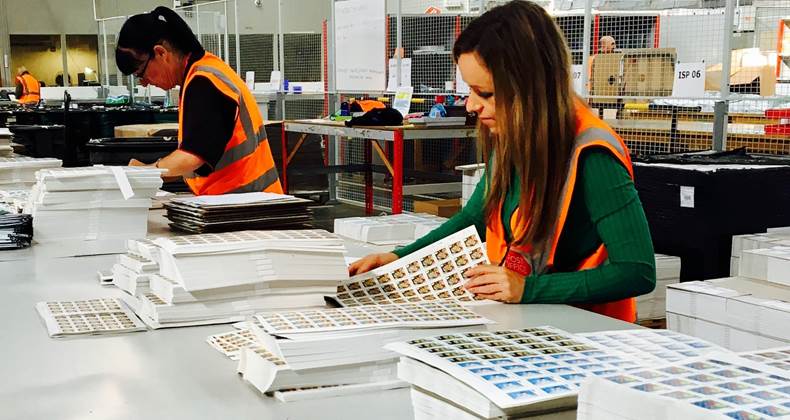 The National Stock Centre in Swindon is busy throughout the year but in the months running up to Christmas the pressure is really on.

During an intense four week period from late September onwards the team prepares to issue Christmas stamps to branches, processing around 10,500 separate orders.

This designs for this year’s Christmas stamps were chosen from over 200,000 entries received from children aged 4-11 years across the UK in response to the question ‘What does the Christmas season mean to you?’ A ‘Santa’ design from Ted Lewis-Clark, aged 10, from Frome, features on the 1st class stamp and ‘Snow Family’ by Arwen Wilson, aged nine, features on the 2nd class stamp. 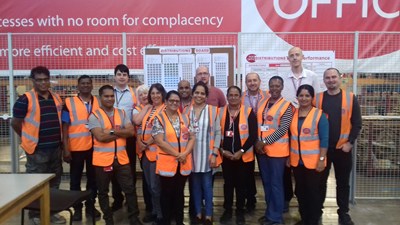 The team picks, packs and sort 115,000 order lines, handling over two million sheets, books and presentation packs. Their target is to pack more than 99.7% of orders accurately.

“We put a lot of hard work into getting the distribution spot-on,” says colleague Marie Salmon. “The whole team understands the importance of getting the product to branches at the right time and in a good condition.”

Val Cowley from the team says: “We’re confident and well prepared for what is our busiest time of the year.”

The first delivery of Christmas stamps was made on 25 September and the last will arrive in branches on 24 October. They’ll be made available for sale from 7 November onwards.

Colleagues in the depots are a vital part of the Christmas stamps’ journey too – they do a great job transporting the stamps and other stock items to our branches. A lot of liaison needs to take place between Swindon and the depots to ensure our vehicles do not ‘bulk out’ as a result of the large volumes being delivered.

Kay Jackson from Swindon has seen several Christmas distributions go through the centre. “I really enjoy getting a first glimpse of the new stamps before they’re widely seen across the country,” she says.